Adrian Peterson is a running back for the Washington Redskins of the NFL. He played college football at Oklahoma and was drafted by the Minnesota Vikings seventh overall in the 2007 NFL draft. Peterson set the NCAA freshman rushing record with 1,925 yards as a true freshman during the 2004 season. As a unanimous first-team All-American , he became the first freshman to finish as the runner-up in the Heisman Trophy balloting. Peterson finished his college football career as the Sooner's third all-time leading rusher.

Following his first professional season, in which he set an NFL record for most rushing yards in a single game (296), Peterson was named the NFL Offensive Rookie of the Year. He was then awarded the MVP award for his performance in the Pro Bowl and became only the fifth player in NFL history to have more than 3,000 yards through his first two seasons. In 2010, he became the fifth fastest player to run for 5,000 yards, doing so in his 51st game.

In 2012, Peterson became the sixth fastest player to reach 8,000 rushing yards, ending the season with 2,097 rushing yards, just nine yards shy of breaking Eric Dickerson's single season all-time record. Peterson amassed 2,314 all-purpose yards from scrimmage in 2012, tying Marcus Allen for the eighth-highest total ever. For his efforts, he received the NFL MVP Award and the AP NFL Offensive Player of the Year Award for the 2012 NFL season. Peterson also achieved the No. 1 spot on the NFL Network's Top 100 Players of 2013. During the 2013 season, Peterson became the third fastest player to reach 10,000 rushing yards in NFL history. In 2015, Peterson became the oldest running back to make first-team All-Pro, doing so at 30 years of age.

On September 9, 2018 Adrian became the 9th player in NFL history to reach 100 career touchdowns on the ground. Peterson is also up to number 10 on the NFL's all-time rushing yards list after passing both Marshall Faulk and Jim Brown.

Peterson becomes the seventh player to rush for at least 12,000 yards and 100 touchdowns. The other six include: Smith, Walter Payton, LaDanian Tomlinson, Jim Brown, Marshall Faulk and Marcus Allen - are all in the Hall of Fame. One day, Peterson will join them there, too. 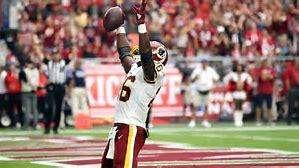